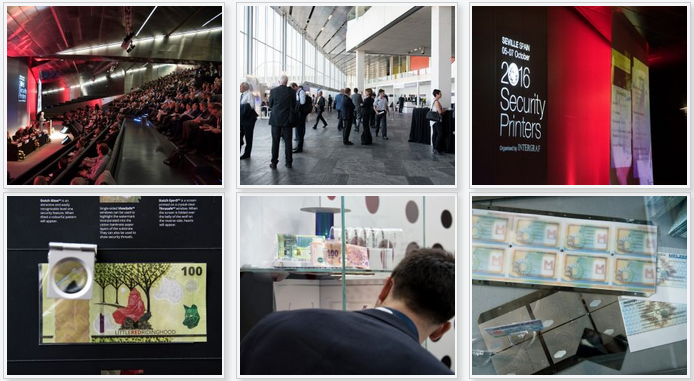 What some of you said

Security Printers is one of the world’s leading venues for the international collaboration of knowledge and advancement in cutting-edge document security technologies. It has proven to be one of the most valuable conferences for our organisations to attend

Security Printers is a very good conference where a lot of people from around the world keep coming, professionals in ID documents and banknotes. For us, this is the right type of attendance: these are either our direct customers or people that can recommend our products

The topics are really interesting. They are not marketing, they are actually topics that we are all interested in. That for me makes it different from other conferences I have been to

Observing the industry for 40 years and continuing for the future

The last Security Printers, International Conference & Exhibition, held in Seville in October 2016, was of course a celebration of 40 years of successful events that brought together manufacturers of banknotes and ID documents, their clients, the national central banks and state ID issuing authorities, as well as the bodies that ensure banknotes and ID documents are secure, namely police and other state supervisory organisations.

The banknote and ID sectors have changed enormously in the past four decades. Their products have become more secure and resistant to counterfeiting, more convenient. In a word, they have never been better.

And here is the irony. Having reached a technical pinnacle, both sectors face an existential threat, if to a varying degree. Cash is being supplanted by electronic means of payment, at least in western, industrialised countries. And while the prospect of electronic replacement is farther away for ID documents, it is on the horizon.

Erick Lacourrège, General Director of the Banque de France concurred, adding that ‘although cash is growing on average at five per cent per annum in developed countries and at twice that rate in developing countries, there is strong bias against it in the banking industry and, to a certain extent, government as well.’

Mr Lacourrège also noted that the production of cash must become more cost effective. More and more technical solutions from beyond the banknote industry are being used. This means that it should shed its insularity and open up to outside influences – while, of course, guarding the security and exclusivity of its processes and materials.

Julio de Ancos Morales, CEO of the newly established Spanish Euro banknote printer IMBISA, defined the biggest challenge in terms of commercial considerations. As a printer of the second series of Euro banknotes, he needs to be very competitive. Especially if, as he thinks, volumes decrease. There is a real need to reduce cost for raw materials and labour across the board.

Such informal discussions complemented the wide range of papers and presentations that formed the body of Security Printers, an event that not only provides an objective picture of the industry as a whole, but also offers an informed view of how it will develop in the immediate and mid-term future.

Where all participants came from